Do excipients purchased from different vendors behave in the same way?

The Mixer Torque Rheometer can be used to assess the behaviour of excipients purchased from different suppliers.

Excipients from different batches or vendors may be variable in quality and it is often necessary to perform pre-formulation assessment for each batch of excipient received.  In some cases, excipients from different vendors require comparative assessment of their equivalent functionality. In this type of assessment, the Mixer Torque Rheometer can be an invaluable tool to evaluate the potential performance of the excipients received, in particular for spheronization aids.

Fig 1. Example of MTR curve showing the relation between the mean torque of wet mass with moistening liquid addition and four phases of liquid-solid interactions

Pellets are commonly produced by extrusion and spheronization. Microcrystalline cellulose (MCC) and cross-linked polyvinyl pyrrolidone (XPVP) have been reported to be very good spheronization aids [1]. For the two excipients, many brands and grades are available commercially. Different companies often use raw materials from different sources and employ different processing techniques or conditions to manufacture their excipients. Even with the same process and raw materials, batch to batch variability will exist. Therefore, variabilities in different grades and batches of the same excipient are unavoidable.

The MTR can be a useful pre--formulation tool to characterize excipients, in particular spheronization aids and classify them into several groups according to their performance in pellet production . For the extrusion-spheronization process, the addition of water to a powder mixture to produce a wet mass is required so as to produce a powder mass that is sufficiently cohesive. The MTR can be used to characterize this cohesiveness by determining the rheological behaviour of wet mass [2].

As the MTR involves adding liquid to the powder blend and mixing them using rotating blades, the cohesiveness of powder blend will be related to the resistance on the mixing blades and the resulting torque is measured and recorded. Torque values are used to quantitatively describe this cohesiveness. On the basis of this principle, a curve showing the relationship between mean torque and liquid addition can be generated. Another parameter, cumulative energy of mixing, which describes the total energy input, has also been used to assess the effect of MCC grade variations on the cohesiveness and rheological behaviour of wet mass .

Soh et al. evaluated eleven different grades of MCC, collected from different excipients companies in their study [3]. Lactose was also used in the study as MCC-lactose blends are commonly used to produce pellets. Maximum torque of MCC [Torquemax(MCC)], maximum torque of blend [Torquemax(blend)], cumulative energy of mixing of MCC [CEM(MCC)] and cumulative energy of mixing of blends [CEM(blend)] were measured. Water content used ranged from 75 % - 175 % (w/w) for MCC and 25 – 55 % (w/w) for blends. Pellets were produced using 3:7 blends of MCC:lactose and 25, 30, 35, 40 and 45 % (w/w) water.
Measured rheological properties (torque parameters) were further correlated with MCC grades and their respective pellets.

The study was essential to understand the characteristics of MCC particles considering their liquid saturation. For example, at lower used water amounts, less porous, denser and more crystalline MCCs resulted in larger torques and thus, more energy was required for mixing. Also, good correlations were found between the rheological properties of MCCs and MCC:lactose blends with the properties of produced pellets, particularly those produced at 30 and 35 % (w/w) water. 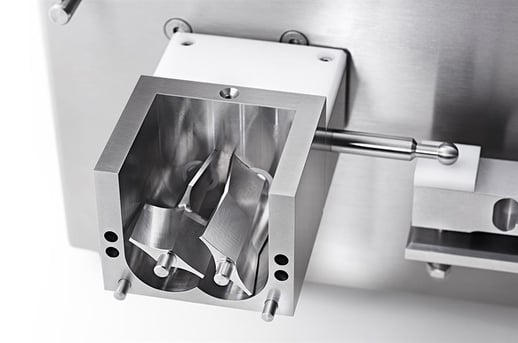 The study proved that the MTR can be a powerful preformulation tool to characterize spheronization aids and predict the properties of pellets to be manufactured by extrusion-spheronization.

Wet granulations are a useful precursor to many solid dosage formulations and as such are widely used in the pharmaceutical industry. Because of the diverse nature of pharmaceutical materials, granulation is often employed as an intermediate process to enhance flow and compaction properties and impr... END_OF_DOCUMENT_TOKEN_TO_BE_REPLACED

How much product should be used in the MTR and how accurate is it?

How much product do you use?  The answer is that this is always product specific. This is demonstrated in this article.  In these experiments the MTR is used in the multiple addition mode whereby increasing binder content is automatically added to different masses of product.  The Caleva Mixer Torqu... END_OF_DOCUMENT_TOKEN_TO_BE_REPLACED

The temperature of the mix during granulation processes is generally considered to be of minor significance in both formulation development and in large batch granulation despite the fact that in some locations ambient temperature can change significantly during the course of a working day. The MTR ... END_OF_DOCUMENT_TOKEN_TO_BE_REPLACED

A Tool For Preformulation Assessment Of Excipients

How long should I granulate my materials?

Variable Mix Time Test It is well-known that a minimum amount of mixing is required to ensure consistent and repeatable product characteristics. What is often less considered is the possibility of over-mixing the product so that the characteristics of the resulting formulation undergo a change. END_OF_DOCUMENT_TOKEN_TO_BE_REPLACED

How do I ensure consistency during scale up?

Consistency Measurement A direct consistency measurement of a small sample (generally around 40 g) taken from a process as it is ongoing.  This allows for accurate comparisons to be made quickly, accurately, and repeatable way. END_OF_DOCUMENT_TOKEN_TO_BE_REPLACED

What characteristics should my extrudate have?

How to produce consistent formulations from different mixers

Customer Quote: Mr. K.S (Aurobindo) "It is exciting to see the correlation between the two graphs and granulation end point".  With a major pharmaceutical manufacturer, together we characterised all their various mixers to produce a consistent formulation. To identify three important characteristics... END_OF_DOCUMENT_TOKEN_TO_BE_REPLACED

Do excipients purchased from different vendors behave in the same way?

The Mixer Torque Rheometer can be used to assess the behaviour of excipients purchased from different suppliers. Background Excipients from different batches or vendors may be variable in quality and it is often necessary to perform pre-formulation assessment for each batch of excipient received.  I... END_OF_DOCUMENT_TOKEN_TO_BE_REPLACED

The Caleva Family of Laboratory Equipment

Whilst you may have heard of Caleva and any one of its flagship pieces of equipment, we'd like to introduce you to the family of Caleva laboratory equipment that you may find helpful for your application in your industry sector.  Choose one process or choose all of them.  Select further functions as... END_OF_DOCUMENT_TOKEN_TO_BE_REPLACED

The following case study demonstrates how the Caleva Mixer Torque Rheometer.  The MTR-3 was an invaluable aid in a specific case. A manufacturer of generic Venlafaxine pellets was experiencing inconsistent results from their manufacturing line. The resultant product was variable in both usable yield... END_OF_DOCUMENT_TOKEN_TO_BE_REPLACED

Research Article University of Padova where their Caleva Rheometer was used   Abstract Vegetable soups are complex mixtures containing vegetables in different percentages, thickeners, salt, fat, and emulsifying/wetting agents. When prepared as dehydrated powders in convenience foods, they need to be... END_OF_DOCUMENT_TOKEN_TO_BE_REPLACED

This world is not only for us. Can you imagine world had no animals, what would it be like? Would the trees be green? Without birds or squirrels, less trees would grow. There would be no pets, no flowers and no bees. If even one part of our ecosystem is removed, we will all die. Without animals, we ... END_OF_DOCUMENT_TOKEN_TO_BE_REPLACED

The different states of agglomeration were identified by the evolution of rheological properties under water addition and shearing conditions using a Caleva® mixer torque rheometer.  END_OF_DOCUMENT_TOKEN_TO_BE_REPLACED

How reproducible can measurements be of something that is not homogeneous?

The MTR-3 uniquely offers a means of characterising the rheological properties of a wet granulation by providing a quantitative value of the consistency of the material tested. The more traditional hand squeeze test, previously widely used, to measure or compare granulations, is falling into disrepu... END_OF_DOCUMENT_TOKEN_TO_BE_REPLACED

One of the strengths of the Caleva Mixer Torque Rheometer (MTR-3) is that it can be used to verify the properties of wet powder mass samples taken during production in large scale mixer/granulator systems. It can be used simply as a quality control tool on a regular basis or specifically as an aid t... END_OF_DOCUMENT_TOKEN_TO_BE_REPLACED

Caleva worked closely with a well known producer of food supplements made from natural materials, plant extracts and other natural food sources.  Their tablet formulations work well and this nutraceutical company has a good reputation for their products.  Generally they do not encounter problems wit... END_OF_DOCUMENT_TOKEN_TO_BE_REPLACED

Determination of moisture requirement to prepare spheroids by extrusion-spheronization

Spheroids are popularly used in the design of multi-particulate drug delivery systems. Extrusion and spheronization is commonly employed to manufacture spheroids in the pharmaceutical industry. It is a multiple-step manufacturing process which could be summarized into the flow chart as shown in Figu... END_OF_DOCUMENT_TOKEN_TO_BE_REPLACED

Save Time and Cost in Formulation Development

In the mid 1990’s, the field of pyrotechnics was limited mainly to applications in aircraft ordnance, fireworks and rock blasting. This has been developed to a highly advanced science and is an extensively used technology which finds application in spacecraft, aircraft and underwater vehicle systems... END_OF_DOCUMENT_TOKEN_TO_BE_REPLACED

A company wished to move a formulation currently undergoing product development from small scale laboratory (with batches of 50 grams) to the next stage for a larger scale batch trial of 100 kg (scale–up).  The development had been started using a small Caleva Multi Lab bench top mixer (maximum batc... END_OF_DOCUMENT_TOKEN_TO_BE_REPLACED

It is well established and understood that one of the most important factors in the development of a formulation for both tableting and making pellets by extrusion and spheronization is the amount of liquid binder added to the formulation. What is less widely acknowledged is the importance of mixing... END_OF_DOCUMENT_TOKEN_TO_BE_REPLACED