How much product should be used in the MTR and how accurate is it?

How much product do you use?  The answer is that this is always product specific. This is demonstrated in this article.  In these experiments the MTR is used in the multiple addition mode whereby increasing binder content is automatically added to different masses of product.  The Caleva Mixer Torque Rheometer. The only way to quantify the rheology of a wet mass.  The MTR has, for many years, been shown to be an invaluable aid in many aspects of wet mass granulation. It has generated accurate and reproducible results describing the properties of a wet mass in a way that is more meaningful than the widely-used “hand squeeze test” 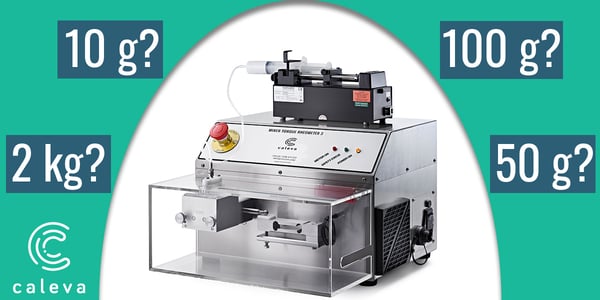 The first set of experiments were made with microcrystalline cellulose (MCC—Avicel PH101). Each experiment was repeated in triplicate and the results are shown in the figures below:

The results showed that 9g of MCC was insufficient with the wet powder simply adhering to the mixing blades and consequently not being mixed thoroughly. However, 21g was excessive with product visibly pressing against the top of the bowls and a high proportion of the material piles above the mixing blades
When water is added to microcrystalline cellulose, it swells significantly and when being mixed, discrete lumps can form on top of the main body of powder outside the mixing blades and bang against the top of the bowl.
These lumps eventually do get broken up and mixed, but this can take some of time. This can add additional variability to the results.

The results show 15g as being the most reproducible within each repetition of a particular added quantity. The above phenomenon occurs much less at 15g which is, in these experiments, to be the optimum quantity per load when using MCC.

A similar set of trials was carried out using Balocel®*. The results are shown below in the figures below:

Analysis of the results above would suggest that a mass of anywhere between 18g and 21g of Balocel should yield reproducible results, as 21g gave a larger corrected mean line torque**, this was chosen as the optimum.

This is as predicted, as Balocel does not expand as much as the MCC and a larger quantity is needed.  In addition to the results shown, a load of 24g of Balocel was tried, but not followed to conclusion as it was found to be excessive in that product was escaping through the top of the bowl.

How accurate are the results from the MTR?

By its very nature, the material being mixed in a granulation is not homogeneous and consequently the level of variation can be high, it is therefore recommended that any experiment be repeated up to three times.  This gives a visual indication of the accuracy and the reproducibility of the results. If all three tests give reasonably similar results then a mean of these results can be comfortably accepted as reflecting the real situation.