A Tool For Preformulation Assessment Of Excipients

Excipients from different batches or vendors may be variable in quality and it is often necessary to perform pre-formulation assessment for each batch of excipient received. In some cases, excipients from different vendors require comparative assessment of their equivalent functionality. In this type of assessment, the MTR can be an invaluable tool to evaluate the potential performance of the excipients received, in particular for spheronization aids. 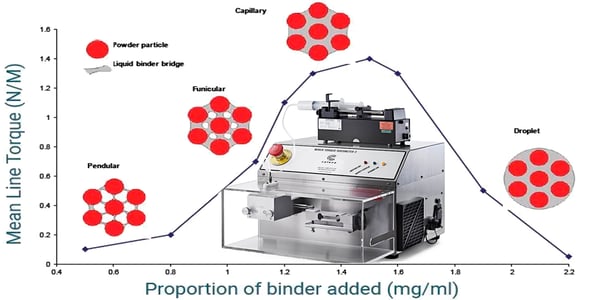 Pellets are commonly produced by extrusion and spheronization. Microcrystalline cellulose (MCC) and cross-linked polyvinyl pyrrolidone (XPVP) have been reported to be very good spheronization aids [1]. For the two excipients, many brands and grades are available commercially. Different companies often use raw materials from different sources and employ different processing techniques or conditions to manufacture their excipients. Even with the same process and raw materials, batch to batch variability will exist. Therefore, variabilities in different grades and batches of the same excipient are unavoidable.

The MTR can be a useful pre-formulation tool to characterize excipients, in particular spheronization aids and classify them into several groups according to their performance in pellet production . For the extrusion-spheronization process, the addition of water to a powder mixture to produce a wet mass is required so as to produce a powder mass that is sufficiently cohesive. The MTR can be used to characterize this cohesiveness by determining the rheological behaviour of wet mass [2]. As the MTR involves adding liquid to the powder blend and mixing them using rotating blades, the cohesiveness of powder blend will be related to the resistance on the mixing blades and the resulting torque is measured and recorded. Torque values are used to quantitatively describe this cohesiveness. On the basis of this principle, a curve showing the relationship between mean torque and liquid addition can be generated. Another parameter, cumulative energy of mixing, which describes the total energy input, has also been used to assess the effect of MCC grade variations on the cohesiveness and rheological behaviour of wet mass .

Soh et al. evaluated eleven different grades of MCC, collected from different excipients companies in their study [3]. Lactose was also used in the study as MCC-lactose blends are commonly used to produce pellets. Maximum torque of MCC [Torquemax(MCC)], maximum torque of blend [Torquemax(blend)], cumulative energy of mixing of MCC [CEM(MCC)] and cumulative energy of mixing of blends [CEM(blend)] were measured. Water content used ranged from 75 % - 175 % (w/w) for MCC and 25 – 55 % (w/w) for blends.

Measured rheological properties (torque parameters) were further correlated with MCC grades and their respective pellets. The study was essential to understand the characteristics of MCC particles considering their liquid saturation. For example, at lower used water amounts, less porous, denser and more crystalline MCCs resulted in larger torques and thus, more energy was required for mixing.
Also, good correlations were found between the rheological properties of MCCs and MCC:lactose blends with the properties of produced pellets, particularly those produced at 30 and 35 % (w/w) water.

The study proved that the MTR can be a powerful pre-formulation tool to characterize spheronization aids and predict the properties of pellets to be manufactured by extrusion-spheronization.

1. Cumulative energy of mixing, a torque parameter measured by Mixer Torque Rheometer classified excipients into groups by their predicted performance. Quality of the pellets produced using different grades of MCC could be predicted using the measured torque values.

2. Mean torque value proved to be another important parameter to assess the functionalities and performance of spheronization aids.