We always offer our potential users the opportunity to test their formulation with us in our lab. This is to ensure that installing our machines would be the right decision for their formulation development, and/or their production environment.

This short article has been written from notes that Dr Steve Robinson made during trials with catalysts sent to us by a customer and we achieved some interesting results with Zeolites and Bentonite.

After several failures of working with the Zeolite on its own, we were able to create a formulation that worked remarkably well.

The formulation devised was a mixture of 14g of Zeolite + 14g of Bentonite + 5ml of water. This was mixed aggressively at 80 rpm for 5 minutes. After the 5 minutes ended, another 2 ml of water was added and mixing continued for further 2 minutes. The material became dark, very hard and looked like it would be impossible to extrude. We tried extrusion anyway and the material easily passed through the 1mm diameter hole die that was attached to the machine. 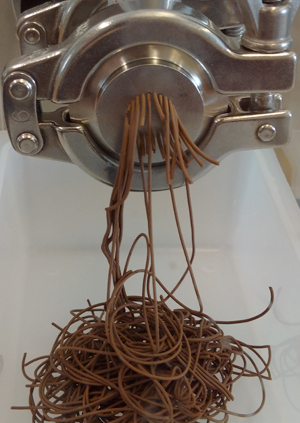 After this success, we spheronized the material at 2800 rpm for 5 minutes, then at 1700 rpm for an additional 2 minutes. The resulting pellets stayed together well and were quite resistant to crushing.

“The results were great!!!!!” – Excerpt from Dr Steve Robinson’s notes.

Dr Robinson decided to run the trial again with a 3mm die. The result was very similar, however the spheronization was not as effective, because there were less beads. We believe if there were two loads of 3mm extrudate in the spheronizer, we would have achieved better results due to the higher amount of collisions.

We face many different challenges in many different industries. If you’re facing a problem with your formulation development, wonder if your process could be more efficient or need some high quality extrusion and spheronization equipment, then contact us.

Increase Surface Area of your product with Trilobe and Quadrilobe Dies

An opportunity to shape and form catalyst materials/particles Caleva have had some considerable success with working with the extrusion of small quantities of catalytic material using the Caleva Multi Lab.  (the first steps of blending and mixing can also be completed in the same Multi Lab base mach... END_OF_DOCUMENT_TOKEN_TO_BE_REPLACED

The Caleva Multi-Lab (CML) can Mix/Granulate, Extrude and Spheronize all in one base unit. This article is about the Extruder attachment that comes with the CML. The Multi-lab is capable of working with a variety of materials from catalysts and pharmaceuticals, to agricultural products. The Extruder... END_OF_DOCUMENT_TOKEN_TO_BE_REPLACED

In the process of extrusion, having different dies available to process your product is key to increasing your chances of development success.  This is why we offer a large range of dies to allow us to work with you to find the dies that best fit your formulation needs. We offer die plates that are ... END_OF_DOCUMENT_TOKEN_TO_BE_REPLACED

Extrusion of catalyst and petrochemical materials

An opportunity in laboratory extrusion with catalyst material.  We have recently had some considerable success with one of our customers working with the extrusion of small quantities of catalytic material. END_OF_DOCUMENT_TOKEN_TO_BE_REPLACED

In collaboration with some of its users, Caleva have recently been successful in extruding of small quantities of catalytic material using the Caleva Multi Lab (the first steps of blending and mixing can also be completed in the same multilevel base machine) whilst increasing the surface area/volume... END_OF_DOCUMENT_TOKEN_TO_BE_REPLACED

Guide to the optimum diameter to length ratio of extrudate fragments

What type of pharmaceutical or catalyst extruder do I need?

All extrusion processes require the generation of pressure within the material to be extruded. When materials are put under pressure heat is generated. This cannot be avoided but different extrusion types generate different amounts of heat. There are basically three different types of extruder and t... END_OF_DOCUMENT_TOKEN_TO_BE_REPLACED

We always offer our potential users the opportunity to test their formulation with us in our lab. This is to ensure that installing our machines would be the right decision for their formulation development, and/or their production environment. This short article has been written from notes that Dr ... END_OF_DOCUMENT_TOKEN_TO_BE_REPLACED

Can trilobe and quadrilobe extruder dies provide benefits when working with catalysts or products for gas adsorption? END_OF_DOCUMENT_TOKEN_TO_BE_REPLACED

Caleva Mixer working in catalyst application for Ethylene and Propylene

Over the past couple of years I have worked with a huge number of chemical engineering teams, trying to crack the optimum base for a catalyst pellet. After hours of trials and research, I am pleased to say, we’ve done it! END_OF_DOCUMENT_TOKEN_TO_BE_REPLACED