Caleva Study on the Importance of Granulation

Our customer, a major pharmaceutical, biotech & nutraceutical manufacturer with an extensive portfolio of products. For reasons of confidentiality we do not name them.

One of our Production Extruder & Spheronizer Systems for manufacturing on a large-scale was used in trials by the manufacturer, but the pellets produced were not acceptable. As the product was already registered, the composition could not be changed. The only changes permitted were to vary: 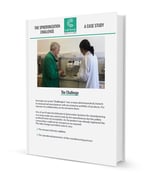 
Two key conditions were observed at the customer site

A preliminary multiple addition test was run using the Mixer Torque Rheometer (MTR). This was to determine the optimum amount of liquid binder for the formulation. A figure of about 0.25 ml/g of the binder was suggested by the results obtained from the MTR. However, at this figure the consistency (or cohesiveness) of the formulation as measured by the MTR was very low (about 0.15 Nm – this is low compared to many formulations that can easily, and do regularly, go as high as 2 to 4 Nm). However, this figure was accepted for the trials as it was in close agreement to the figures generated by the manufacturer during their own trials. The data from trial 1 is shown as an appendix on page 12. The graph shows that the optimum binder ratio is likely to be between 0.23 to 0.3 ml/g.

A second trial was run using the Caleva Mixer Torque Rheometer to examine the proposition that additional granulation might improve the consistency of the product, as on occasion this has found to be the case in previous experiments with different products.

A sample of 20 g of premix was added to the MTR bowl with 5ml of binder.  The MTR granulator was run at 50 rpm and the consistency measured periodically.

Figure 1 clearly shows that with continuing granulation, the consistency of the formulation continued to increase throughout the whole granulation period (about 25 minutes). There was no indication that the maximum level had been reached. This achieved a higher figure than the one reported during the Multiple Addition test (0.215 Nm compared to 0.15 Nm) and presumably (although no measurements have been made) with the standard formulation developments that we have been testing. The higher level of consistency obtained suggested that there would be a good chance that the resultant material would be more suitable for extrusion and spheronization and make it easier to handle and remove some of the stickiness problem that had been troublesome.

Trial 3 - Effects on consistency after trial 2

An increase in the 25-minute granulation time would not be ideal.

Trial 1 above was repeated, but with a mixing speed of 150 rpm (compared to 50 rpm in the first trial). A 25 minute granulation time was also used to see if a limit could be reached with an increased blade revolution speed. The results are shown in Figure 2 below. 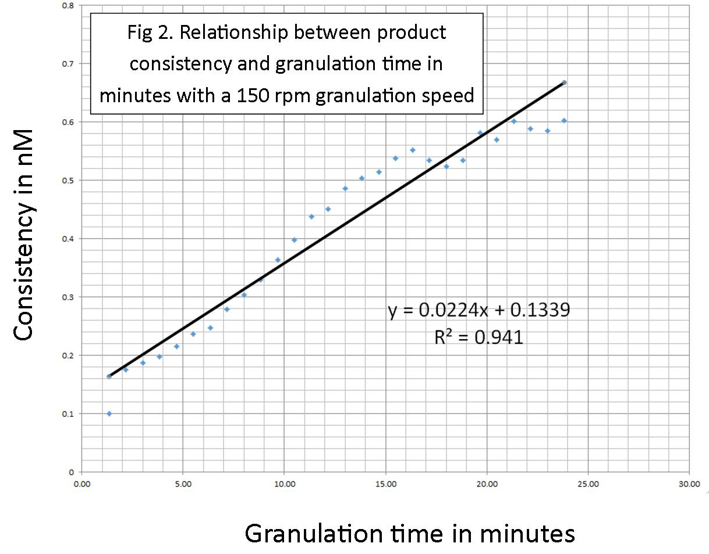 On the graphs the results look similar but the difference in scales should be noted.
Once again, with the more aggressive granulation no peak was reached. The increase appeared to be linear to a maximum of about 0.6 Nm.

Again, significantly higher than the consistency generally used in the formulation process.

A subjective and qualitative assessment of the resultant granulation showed that the material extruded more easily, felt drier and was less sticky during spheronization than the ones experienced in the large-scale trials, despite having the same amount of binder liquid.

Figure 3 shows the data on the same graph, for ease of comparison, of consistency related to the number of revolutions (not time) at different blade rotation speed.

In addition to the above it was quite evident from a qualitative (and subjective) physical examination of the formulation after the significantly more aggressive granulation the material was easier to work with and had lost the “wet and sticky” feeling that we had seen in the larger scale samples.

As the results showed that a more aggressive granulation led to a higher level of consistency and increasing the plasticity of the formulation, this suggests that the extrusion and spheronization process would benefit from this, making the product easier to manage.

A set of two trials were completed using the Caleva Caleva Multi Lab to investigate the effect of a significantly more aggressive granulation on the extrusion and spheronization of the formulation. These are shown below as trials 4 and 5

Materials
20 grams of the premix provided by the manufacturer

The binder solution was at 90 to 95 deg C when added by a syringe.

Granulation
The granulator was run at 150 rpm for 25 minutes
(Number of revolutions =~ 3750)
The mixing bowls and blades were soaked in boiling water and dried before use so that they were quite warm during the granulation. Temperature measurements were not taken.

Extrusion
The material was extruded through the CML small screw extruder running at 90 rpm with a 1 x 1 mm hole dies.

Spheronization
The extrudate produced were spheronized in an 85 mm diameter bowl at 2500 rpm for 8 minutes (20.000 revolutions).

Results
The extrusion and spheronization worked well with no evidence of the stickiness that was previously experienced at the customer site.

Trial 4 - Images of pellets after spheronization and before drying

Pellet samples after spheronization and before drying. No sieving, no selection. 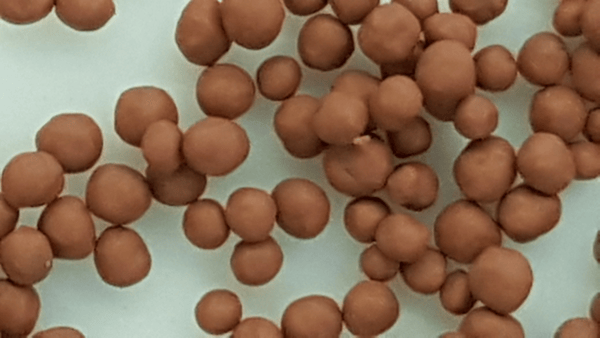 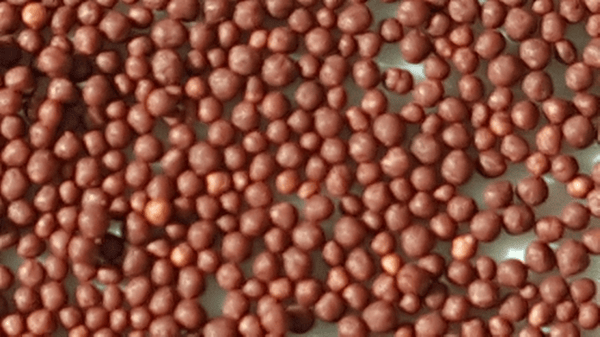 Close up images of pellets with measurements. No sieving, no selection.

The measurements shown on specific pellets are: - 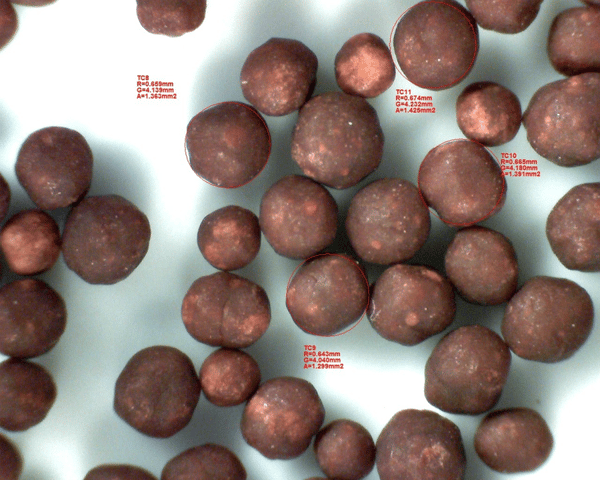 Trial 5 - Can the process time be reduced?

A trial fundamentally similar to Trial 4 but modified to see if the process time could be reduced.

Material
20 grams of premix provided by the manufacturer was added to the CML
5.5 ml mix of water and prepared binder

Granulation
The granulator was run at 240 rpm for 15 minutes
(Number of revolutions =~ 3600 revs (compared with 3750 in trial 4))
The mixing bowls and blades were soaked in boiling water and dried before use so that they were quite warm during the granulation.

Extrusion
The material was extruded through the CML extruder running at 90 rpm with a 1 x 1 mm hole dies.

Summary results from the initial Multiple Trial to choose a starting point for the optimum binder content ratio. 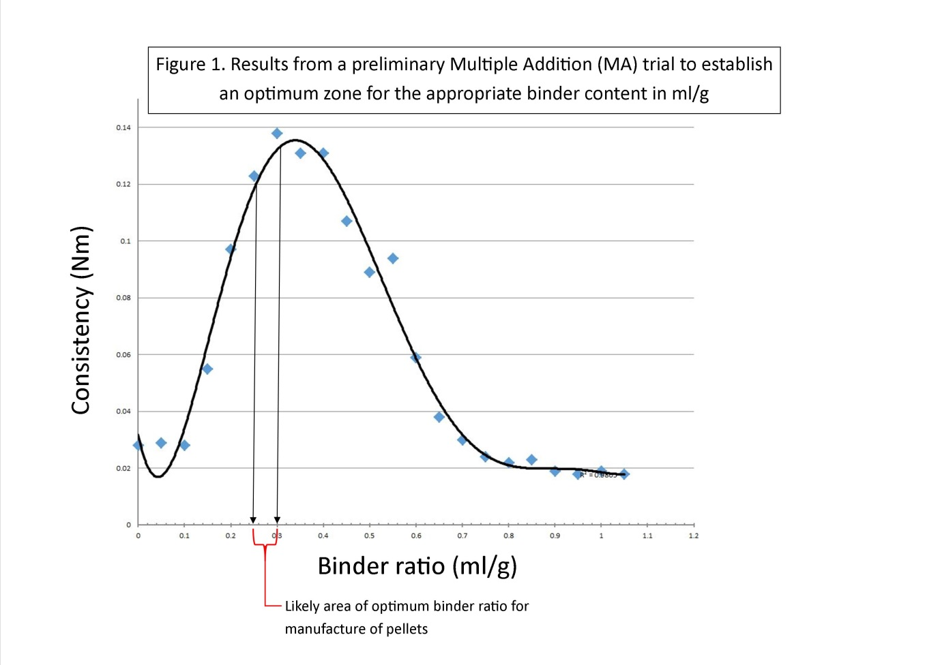 Note that this result was taken from one trial and it is normally recommended that three trials are completed and the mean of the three trials used for the binder ratio determination.

Such a graph is an indication but possibly not a definitive result as the effect of “mix time“ is not considered in these multiple addition trials. It is recommended that an additional set of trials are used if possible making use of a screen extruder and larger spheronizer 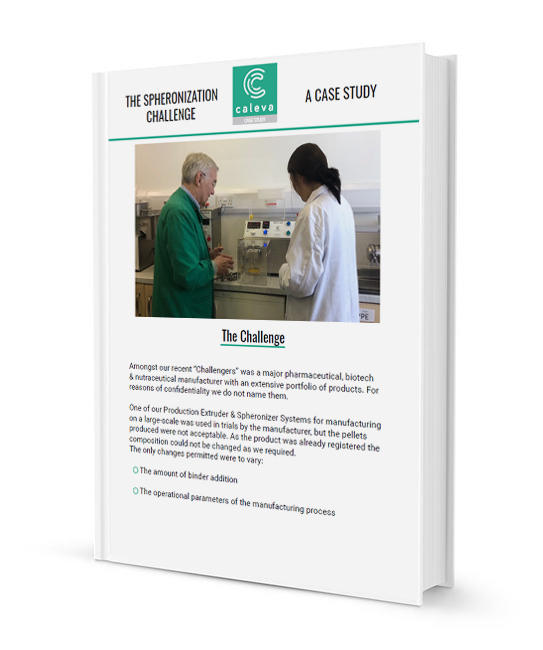 This Case Study as a pdf 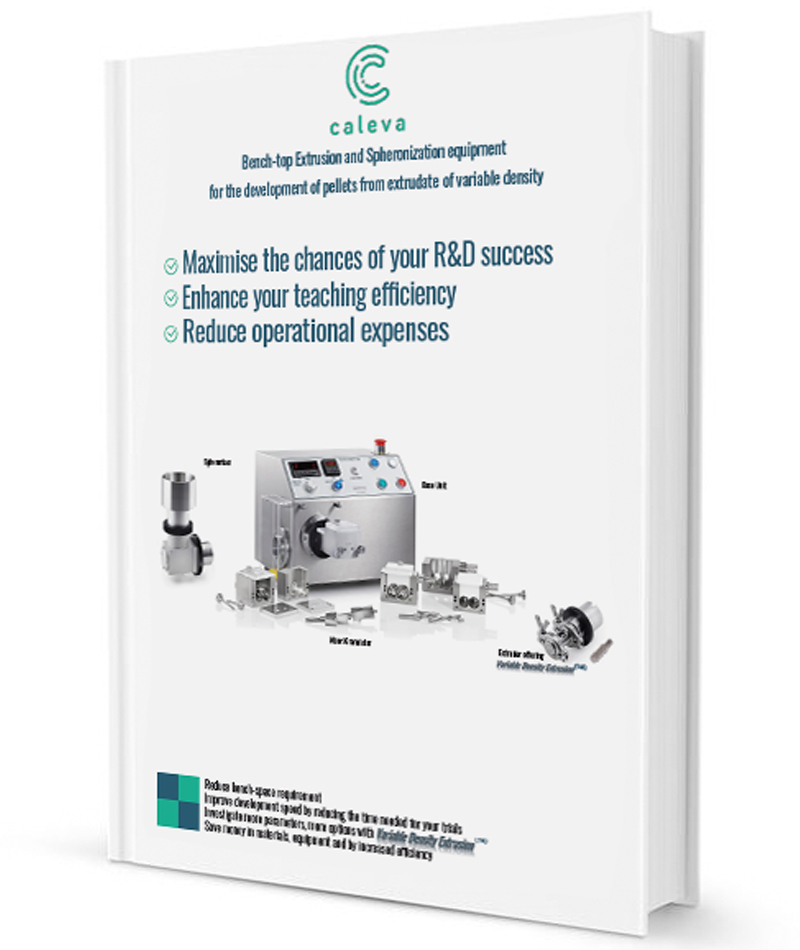 Download a 12 page booklet that describes the Caleva Multi Lab 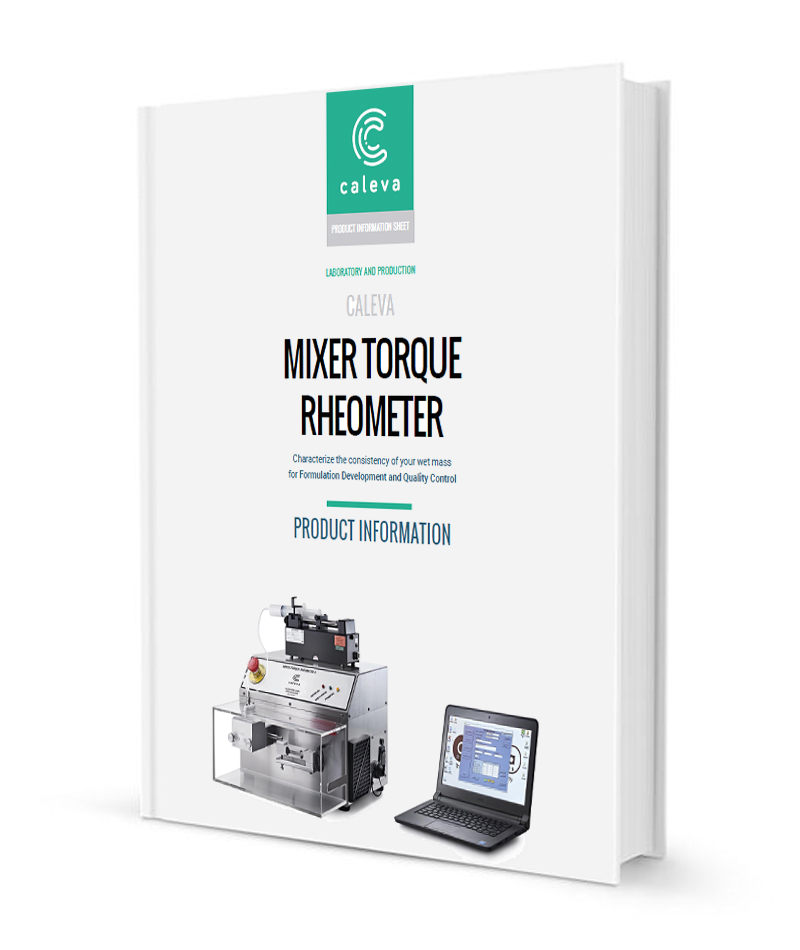