Does the Caleva Mixer/Granulator/Blender allow me to mix and test small batches of product? 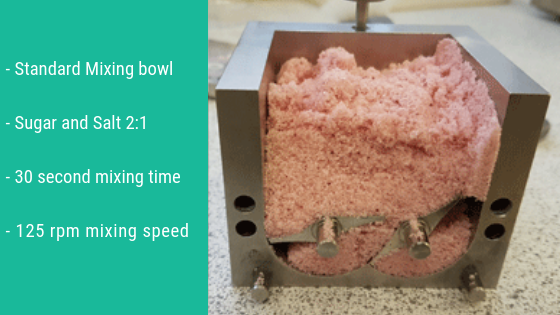 We are frequently asked for information about the ability of the small mixer/granulator/blender, a must have tool for any laboratory needing to complete these processes quickly with small sample sizes. Recent trials provide new information about the capability of the Caleva mixer/granulator/blender (MGB) and its ability to act as a stand alone mixer when mixing powder samples of different sizes and weights.

In this experiment, we tested different mixing bowls, products and mixing times to get a variety of results demonstrating the flexibility of the Caleva mixer/granulator/blender.

Standard bowl: The standard bowl has an internal volume of 275 ml. The reduced height bowl has a volume of 71 ml. The contra-rotating blades running at different speeds are designed to impart shear on the product during the mixing and granulating process. This property can be useful in many circumstances and this is the standard option for most products.

Sigma blade and bowl system: A second option is a bowl and blade system where the blades do not overlap (but do rotate at different speeds). This system is designed for situations where greater emphasis is required for the mixing component of the process and less emphasis on the level of shear required. This bowl and blade set is particularly useful when working with higher viscosity materials.

The Sigma blade bowl system is available in full size.

This system can be particularly useful for mixing products that are more difficult to work with.

Two different products were tested to help a customer who was having difficulty in obtaining homogeneous mixes of small volumes of material that were considered difficult to mix well in the very small batch size required.

A mix of sugar and salt in the ratio 2:1

A batch of 100 g of household sugar was weighed and added to the mixing bowl, together with a batch of 50 g of table salt. A full-sized standard bowl without an insert was used. Inserts can be useful when very small quantities are required to be mixed but in this case it was not necessary.

This batch was mixed for about 30 seconds at 125 rpm and it appeared that with this particular mix (with a tapped bulk density of 1.35) the mixing process worked but was not optimum. This batch size was a little too big to achieve very effective mixing quickly.

A 25 g sample was removed from the mixing chamber and the remaining batch of 125 g was sufficiently mixed within about 30 seconds using a mixing speed of 125 rpm. These observations were by eye. In order to make a visual inspection easier 0.4 ml of an aqueous food dye was added to the sample. The sample was mixed for an additional 30 seconds at 125 rpm.

In a 2nd trial with the same material the Sigma blade system was used. In this case the mixing was effective but less efficient (it was mixing but was taking longer). The picture below shows the mixed state in the Sigma bowl after 90 seconds. It is believed that the eventual effectiveness of the mixing would be equal to that of the standard blade set but in this case a longer mixing time would be required.

In a 2nd set of trials an attempt was made to mix a fine oat bran (tapped bulk density 0.54) with a “room temperature solid” palm oil with a melting point of about 80°C.

The standard bowl and blades were used as the shear activity was considered important in case the palm oil began to solidify before being fully dispersed.

The optional water jacket bowl was not available and thus not used (generally this would be recommended in such a case). The bowl was heated before use by immersion in hot water (at about 80°C).

After 10 minutes the resulting mixture had the appearance of being completely homogeneous.  The fully blended - but now solidified oil - caused the visible colour change which appeared homogeneous throughout the sample.

With the higher quantity of palm oil, and after 10 minutes, there was some sticking of material on the mixing blades. This material was scraped from the blade and the material was mixed for an additional 2 minutes at 240 rpm. The additional mixing removed the small amount of material and the mix was homogeneous. In practice, this additional 2nd mixing is a reasonable step in the few instances that it may be required.

In a final trial, 40 g of fine oat bran was mixed with 2 ml of palm oil for 10 minutes at 240 rpm. This smaller quantity mixed effectively and the resulting mixture was again homogeneous as shown below.

By Dr Steve Robinson
18 Mar 2021 in Granulation and Mixing