Caleva worked closely with a well known producer of food supplements made from natural materials, plant extracts and other natural food sources.  Their tablet formulations work well and this nutraceutical company has a good reputation for their products.  Generally they do not encounter problems with tablets breaking or disintegrating during manufacture, packing or storage.

However, one particular plant extract tablet was constantly giving problems.  The manufacturing process included manual hand mixing of all the formulation ingredients.  The mixing was continued until the product appeared to be homogeneous.  This was a time consuming and labour intensive process and so  “overmixing” was not an issue.  This process was used for other products where low “intensity” mixing gave good results. 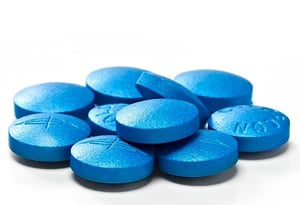 THE PROCESS
The rheological properties of this “hand-made” granulation in relation to the mixing intensity or the energy supplied in the mixing process had never been considered.

Using the Caleva Mixer Torque Rheometer the rheology of this granulation was examined in a quantitative way to see if extending the granulation time or mixing intensity would have a significant impact on the consistency of the formulation and properties of the final product.  With some formulations, mixing intensity can have a significant effect on granulation properties.  From a practical standpoint this was a relatively simple and quick task using the Mixer Torque Rheometer.

The assessment was made utilizing a 20g sample of the ingredients that make up the dry powder mixed together with the appropriate quantity of liquid binder (in this case, water). The instrument was used to measure the consistency of the material in the bowl as the granulation progressed. Idealised results the pattern of what was obtained are shown over the page.

THE RESULTS
The results (Figure 1) show that with this particular formulation the consistency remained at a fairly low level for a significant period after all the constituents of the formulation appeared to be uniformly mixed but with additional mixing the consistency rose rapidly.

Figure 1.
A diagrammatic representation of results obtained from the MTR showing the consistency of a nutritional formulation with an extended granulation time

The results showed that in this particular case the granulation regime is of paramount importance to achieve the required product quality. With the additional granulation time the consistency of the formulation showed a dramatic increase in the measured consistency. The cohesiveness between the particles in the mix became significantly stronger demonstrating that additional and continued work done to the apparently homogeneous mix were essential to achieve a formulation with sufficient cohesiveness to produce an acceptable tablet.