Determination of moisture requirement to prepare spheroids by extrusion-spheronization

Spheroids are popularly used in the design of multi-particulate drug delivery systems. Extrusion and spheronization is commonly employed to manufacture spheroids in the pharmaceutical industry. It is a multiple-step manufacturing process which could be summarized into the flow chart as shown in Figure 1.

The rheological or mechanical properties of the wet mass have been found to have a significant impact on the subsequent extrusion and spheronization steps. When the moistening liquid, water, is added into the powder blend, cohesiveness of the powder mass increases and this causes higher resistance to mixing. Therefore, the torque measurement of the wet mass is consistent with the different stages of liquid saturation [1]. Figure 2 presents a typical example of the change in wet mass torque with moistening liquid addition, which was obtained using MTR. As can be seen, four phases of liquid–solid interactions could be identified using the MTR curve, namely pendular, funicular, capillary and droplet phases.

When moistening liquid is added, the torque of wet mass rises as the liquid saturation goes through the pendular and the funicular phase. The maximum torque (Tmax), which approximately corresponds to the capillary phase, is reached when complete liquid saturation (WTmax) is attained [2]. Hence, the moisture requirement for optimal spheroid preparation could be estimated using the WTmax read off from the MTR curve of any particular formulation under study. Often, the amount of moisture needed for spheroid production is usually in the region of 80-100% of WTmax This would be an invaluable aid in formulation development of spheroids to be prepared by the extrusion-spheronization process, as the MTR measurement is quantifiable, rapid and only requires a small sample size.

CASE STUDIES
During the extrusion and spheronization process, the performance and functionality of MCC is highly dependent on its interaction with water. An optimum range of water:MCC ratios exists for MCC to be most effective as a pelletization aid. Outside this range, good quality spheroids may not be produced.

Fig 2. An example of MTR curve showing the relation between the mean torque of wet mass with moistening liquid addition and four phases of liquid-solid interactions 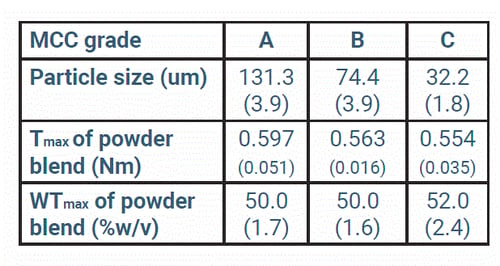 Table 1.  Particle size of three grades of MCC (A, B and C), Tmax and WTmax of binary powder blends containing MCC and lactose. Figures in brackets represent standard deviations.

As can be seen in Table 1, the three grades of MCC exhibited very different particle sizes, from 32.2 to 131.3 μm, but their rheological properties of their moistened masses appeared independent of MCC grades. The resultant pellets were all very spherical, with narrow size distributions and of high yields. The excellent efficiency of all the three grades of MCC at producing good spheroids could be attributed to their similar WTmax and high Tmax values.

However, X-PVP with larger particle sizes of 183.5 μm (grade E) exhibited much lower Tmax values compared with that of X-PVP with smaller particle sizes. In turn, the extrudates produced using the powder blend containing X-PVP grade E were observed to break up into small fragments instead of forming spheroids during the spheronization process.