Caleva training seeks both successful and unsuccessful results - why?

An installation and training is generally specifically designed so that the operators and other users can learn how to use the equipment quickly and work through series of procedures to produce acceptable results. However, our experience after several years of working with operators and researchers during installation and training, tells us that all users learn more about the equipment and the technology of extrusion spheronization when things don’t immediately produce acceptable results and when they can learn what to do and how to react when things don’t go exactly as planned.

The installation and use of a Caleva bench-top Extruder 20 and Spheronizer MBS 250 at Diffucap Chemobras - Química e Farmacêutica followed this philosophy. An initial set of simple trials were made during an installation training by Caleva staff of the Caleva bench top screen Extruder 20 and benchtop Spheronizer MBS 250. A summary of a small trial report  produced by the end user showing his view of the trials and the results obtained are shown below.

Initial Trial 1 with a mix of Avicel and water

Trials were completed using a mix of Avicel (PH101) and water. The samples were mixed in a small laboratory planetary mixer with water as a liquid binder as shown in the table below. Three tests were performed to check the functionality and to give a guide to the optimum amount of binder, to obtain standardized pellets.

The parameters of the granulations used in all trials were not recorded. The mixture was extruded using the Extruder 20 with the MBS 250 Spheronizer with a range of 600 to 800 rpm, with samples being taken after 2 and 4 minutes of spheronization. The formulation details and results are shown below.

Products tested and results from trial 1 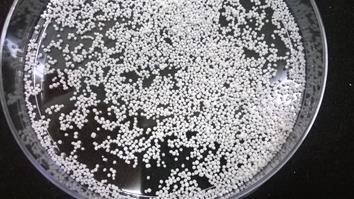 Figure 1 - Results showing pellets produced from an initial, intermediate step using a simple mix of Avicel and water that was considered unsatisfactory as the pellets had a poor level of “roundness”

The results were graded as being considered “satisfactory” or “not satisfactory”. The trial was not intended to provide a detailed and definitive optimum result.

Results showed that the initial trials with a simple formulation mix of Avicel and water needed some modification in order to obtain a satisfactory result. Whilst optimisation was not necessary, the equipment worked extremely well in demonstrating that results could be produce acceptable results simply and easily but that formulations did need some investigation and modification. This seems like a simple enough step to understand but initially many operators that are new to the technique of extrusion spheronization need some experience to be able to get a “feel” for this basic idea.

Trial 2 with material “Premix B”

As with the previous trial series, a set of trials were completed using a different formulation to give a guide to the optimum binder requirement for a slightly more complex formulation.

The liquid binder used was water, ethyl alcohol, or a mixture of the two. Mixing and extrusion parameters were not reported and the spheronizer was run between 600 and 800 rpm with sampling after 30 seconds and 60 seconds. In an initial test made with an inadequate amount of liquid the material in the spheronizer would not bind together and returned to a powder state very quickly. This test is not reported.

For the second test we started using a mixture of a substance “B” that was mixed with povidone (the ratio is not reported). This mixture was granulated with a PVP solution. Below are the tests performed, together with the grading for the results.  Once again,  using a slightly more complex formulation and by  working through a series of failures, satisfactory result was obtained relatively quickly.

Products tested and results from trial 2 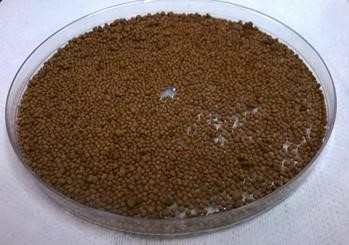 
Three tests were carried out to estimate the optimum amount of liquid binder with a different formulation. The premix (Material C) was granulated with a PVP solution. Mixing parameters and details of the formulation pre-mix were not given. Spheronizer parameter: 1000 rpm with sampling after 1 and 2 minutes. A summary procedure and of the results is shown below. 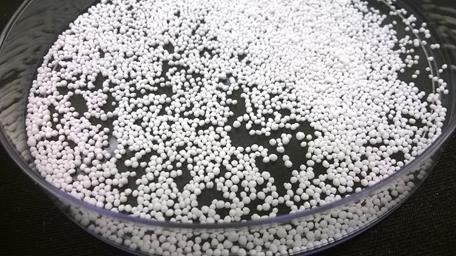 Three tests with a more complex premix were completed to give a guide to the optimum amount of liquid binder required. Premix D (composition not disclosed) was granulated with the binder solution. Spheronizer parameter: 800rpm with sampling after 1 and 2 minutes.
Once again, the same procedure was used with initial trials not being considered as giving an acceptable result. A few additional trials with the formulation modified achieved an improved and an acceptable product was obtained.

The trials were not designed to give optimum results from the beginning. They were designed to show that operators could learn how to use the equipment quickly and work through series of procedures that would come closer and closer to delivering acceptable results.  On the basis that generally during training operators learn more about equipment and technology of extrusion spheronization when things don’t produce acceptable results and when they do. The trials were good demonstration of this, and the customers being trained were happy with the results that they themselves had obtained and more than this the knowledge that they had gained.

The results are provided by the customer and describes how the training & installation was completed and confirms that they are very happy with the equipment, the training, and the initial results obtained.